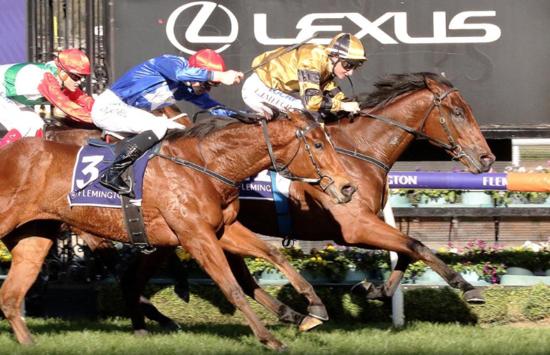 Fabulanski will get a chance to emulate his sire in the Victoria Derby after his surprise win in Saturday’s Listed Taj Rossi Series Final (1600m) at Flemington.

Fabulanski is a son of the 2013 Derby winner Polanski, who improved rapidly with each step up in trip, winning the UCI Stakes and Norman Robinson Stakes on the way to his Victoria Derby triumph.

“The last three runs to the Derby are easy. It’s the UCI (Stakes), Norman Robinson (Stakes) and then the Derby,” Laing said.

Fabulanski ($51 - $31) smoothed his path to the Victoria Derby after he earned a $90,000 winner’s cheque when he held off the $2.25 favourite Rubisaki to claim the Taj Rossi Series Final.

The youngster went into the $150,000 race a maiden but Fabulanski’s last start second at Bendigoconvinced Laing he could notch his first win at Flemington. Linda Meech helped prove Laing right with a smart front-running ride.

“He covered an extra six or eight lengths (at Bendigo) and virtually went around the outside running rail, he dropped in weight today and his work had improved,” Laing said.

“Our plan was to run them along to make it a good tough mile, and it worked.

“The main reason we ran him today, apart from thinking he could win, was to get some stake money and if he ran in the top four.

“We can run this horse wherever we want now.”

Laing said he would give Fabulanski a four-week break before bringing him back to prepare for his Derby campaign.

The Chris Waller-trained Pancho ($7.50) saved ground on the home turn before finishing third, three-quarters of a length from the winner.