Missrock goes from the nearly mare to multimillionaire 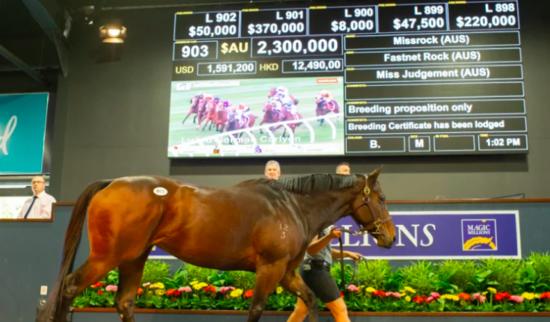 Sometimes blind luck falls your way. Trainer Robbie Laing knows that more than most after Missrock topped the first day of the Magic Millions broodmare sale at $2.3 million.

Laing sat back with owners Ray and Susie Montague toasting a sales ring success. Missrock had been a quality sprinter on track, twice a runner-up in the Goodwood, a group 3 winner but more a nearly horse on the track that earned more than $1.3 million.

She was also nearly a nearly horse in the ring, according to Laing.

He smiled as he told the story of when he first set eyes on the filly at Magic Millions in 2015, just before she was to be sold.

“I had a horse breaker from Melbourne with me and he was asking what I look for in a horse,” Laing started.

“She walked past and I wasn’t paying that much attention and said that colt there.

“He looked at me and I don’t why I’m asking you because that’s a filly.

“I thought it looked like a $1 million horse and just watched her walk and went around the front.”

Laing still didn’t have any intention of buying the daughter of Fastnet Rock and watched as the Hawkes stable got to $450,000 and couldn't help but to have a shot at $475,000.

“That was it. No more bids and she was passed in. Barry Bowditch, who was spotting, came up and told me they want 500,” Laing said.

“I didn’t have a buyer, so I rang Ray and then my vet to find out if there were any problems with her. I knew the Hawkes were bidding on her, so they would have done more homework than me.

“Ray got back to me and said he would take more than half.”

Montague and his wife Susie know a bit about racing fairytales. Susie is the producer of the Michelle Payne film Ride Like A Girl, documenting the first Melbourne Cup win by a female jockey, but since that day in 2015 they hadn’t been having much luck.

“We had bid on four or five [yearlings] and got blown out the water. Robbie rang and I trusted him, so I asked Susie and we decided to buy her,” Montague said.

"When we saw her and she was just magnificent, we just had a good feeling the first time we saw her."

Laing went to the vendor - Cressfield Stud’s Bruce Neill - and closed the deal.

“I sold him to good people and we have become good friends and I have put some into Susie's film about Michelle Payne,” Neill said. “It has opened up a different world to me. It is strange how good this story has been for everyone.”

Missrock won a Debutant Stakes and Percy Sykes Stakes as a two-year-old before being placed in a Wakeful Stakes at three over 2000m, but it was as the older sprinter that she would make her name.

“We had quiet a bit of fun with her and were so close to winning that group 1. We got it today,” Laing said. “Coming here today we were hopeful that she would get close to $2 million but you never know.

“It is a great result for everyone.”

As the bidding went past the amount Missrock earned on the track, the Magic Millions arena fell silent with Arrowfield Stud and Coolmore Stud still in the mix.

But the hammer feel to Bowditch, now the boss of Magic Millions, who was on the phone was to Queen Elizabeth’s bloodstock advisor John Warren. He was buying for a private owner from Highclere Stud in England.

Missrock was one of five mares to break the seven-figure barrier on Tuesday with one-time Everest contender Invincible Star bringing $1.45 million and Whispering Brook $1.1 million while Oregon’s Day, which will run in next month’s Tatts Tiara, and Savvy Coup each brought an even $1 million.