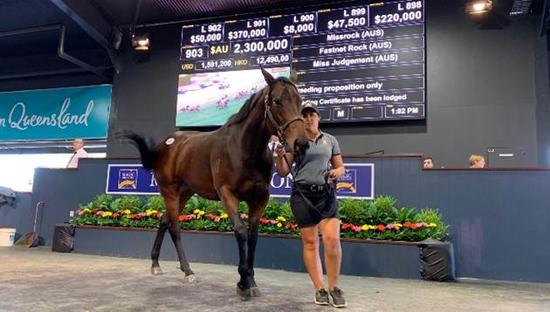 Missrock did not achieve Group 1 success on the racetrack, but she generated a payday reserved for the winners of only the biggest races on the Australian calendar at the Gold Coast on Tuesday.

The daughter of Fastnet Rock, who was raced by Ray and Susie Montague and friends, entered territory reserved for only the best breeding prospects when she smashed the $2 million barrier at the Magic Millions National Broodmare Sale.

The five-year-old, who was prepared for sale by Kingstar Farm, was bought for $2.3 million by English bloodstock agents John and Jake Warren on behalf of clients who plan to take her to Europe and try and breed Classic winners.

Susie Montague conceded it was sad to be parting with the mare who not only won three Black Type races but was placed in Group 1 races including the Black Caviar Lightning and The Goodwood and won almost $1.4m in stakes, but was glad to farewell her in style

“I felt really sad this morning, when I said goodbye,” she said just minutes after auctioneer Grant Burns brought down the gavel.

“But that was a Group 1 win just then, that was incredible, and she’s going to be the most beautiful breeder.”

Missrock’s broodmare sale price was almost five times the $500,000 Robbie Laing paid for her at the Magic Millions Gold Coast Yearling Sale and was beyond what Ray Montague expected her to realise.

“I thought $2 million was tops,” he said. “I always thought we’d get 1.5 to 2 (million) because there’d been an incredible amount of interest in her.

“That was our first mare that we’ve ever sold really, and been involved in, so it was quite incredible.

“It’s a lot easier buying horses than selling them. The heart was calm on the exterior but certainly inside it was pumping a bit.”

Missrock was the headline of a stellar first half of the opening day of the sale, snatching top-price honours from Invincible Star, who sold for $1.45m just under an hour earlier.

The former Gai Waterhouse and Adrian Bott-trained speedster was knocked down to James Bester and Tom Magnier.

She was the second high-priced daughter of I Am Invincible knocked down to Coolmore interests, also acquiring dual Group 3 winner and Group 1 Empire Rose Stakes runner-up Eckstein for $750,000.

Invincible Star and Eckstein will both be served by American Triple Crown winner Justify, along with New Zealand Group 1 winner Savvy Coup, which Coolmore bought for $1m late in the session.

Daughters of I Am Invincible were in hot demand on Day 1, but I Am A Star’s owners had to work to get a deal done after she had left the sale ring after she was passed in for $1.4m.