Gennady gets the job done at Sandown 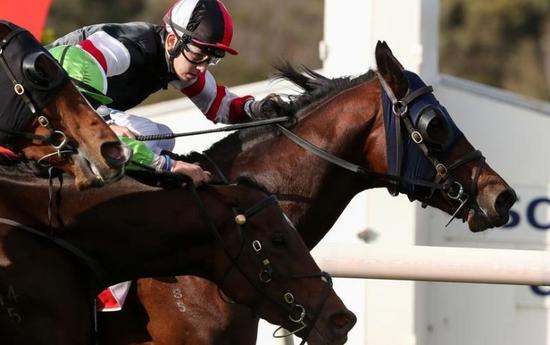 Gennady is lucky to be alive let alone a two-time winner, leading all the way at Sandown to claim his second victory.

After a maiden win at Mornington in early May, Gennady proved too strong as a $21 chance in Sunday’s Samson Handicap (1300m).

Trainer Robbie Laing revealed Gennady’s dam Citrium suffered a terrible injury in an accident with a fence and was going to be euthanaised until a neighbour intervened.

When Gennady, by the Laing-trained 2013 Victoria Derby winner Polanski, was eventually weaned he was in a paddock with other colts.

“But he broke out one night and got in with 20 of the broodmares and he was trying to cover them when he was 12 months old,” Laing said.

“He got kicked, he got savaged and when we tried to catch him and couldn’t get near him.

“He was causing so much havoc that I said to my son Jack that he might have to be shot to get him out of the paddock and save the mares.

“Jack said he’d get the Lynch boys and Wayne Cuddihy and rope him if that’s all right, and I said ‘you can have him’.”

From his first unofficial trial at Cranbourne through to a trial at Stony Creek in December, Gennady had a big boom on him.

He was sent off a $3.80 chance on debut at Caulfield in January and after showing pace, weakened to finish sixth.

“That was probably his excuse at Caulfield. He’d been in work 12 months,” Laing said.

“He went there with a big boom on him but he pulled up with pimples and mucus in his throat.

“He also jarred up on the hard ground so we turned him out and he’s had two starts this time in for two wins.

“He’s got so much ability and speed that he broke them up today.

“He kicked away with a good break and it takes a good horse to lead all the way plus it was a big jump in distance for a baby from the 1000 (metres) to the 1300, especially here up the hill.”