STARS OF CARRUM ON TARGET FOR G1 GUINEAS 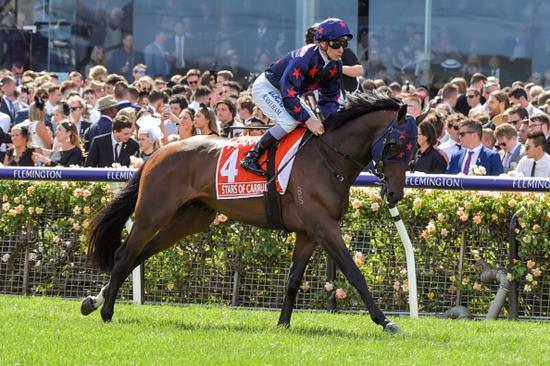 Trainer Robbie Laing says Stars Of Carrum’s opponents will need to be strong late in the Australian Guineas.

The colt finished ninth behind The Inevitable in the 1400m race, beaten 3-1/2 lengths, but at no stage gained clear running.

“His sectionals in the C S Hayes were outstanding even though the handbrake was on,” Laing said.

“He went to the line under a tight hold.

“He’s improved a lot. He galloped a half-mile this morning (Tuesday) and pulled-up sensational.”

Ben Melham, who was victorious on the colt at Moonee Valley before finishing second behind Extra Brut in the Victoria Derby, was reunited with Stars Of Carrum in the C S Hayes.

“He got off him the other day and his first comment, which is always interesting in anything you do in life, was ‘this will win the Guineas’,” Laing said.

“I hope he’s right. I always thought 1600 metres would be too short for him the way he’s bred and he was quite dour in the spring, but I think he’s a very much improved horse, more rounded, stronger, mature, faster.

“I only ran him over 1200 metres first-up because of being brought up in the 70s and 80s, I was worried about the old second-up hoodoo.

“I didn’t want to be going to the C S Hayes and into the Australian Guineas second-up.

“With that theory in mind, I went the 1200 metres first-up, into the C S Hayes into the Guineas and third-up over the mile, there shouldn’t be too many excuses.”

“He’ll do some pacework Thursday and he’ll be right to go Saturday,” Laing said.

“They won’t want to be wilting in that last 200 metres because he’ll come right over the top of them.”

Stars Of Carrum is into $13 for the Guineas with Mystic Journey the $4.80 favourite.