Robbie To Star In Another Derby? 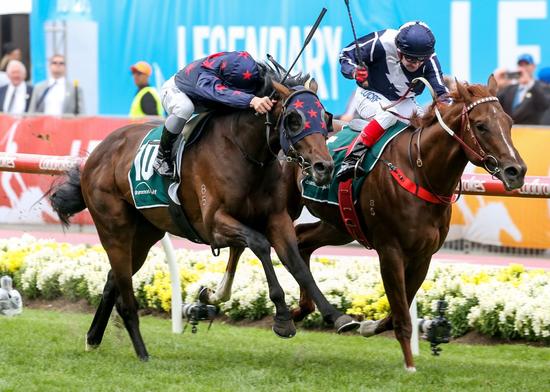 Cranbourne trainer, Robbie Laing, reckons that not much beats standing in the winners’ enclosure during the Melbourne Cup carnival.

Laing was there in 2013 after winning the Group One Victoria Derby with Polanski and, five years later, he’s looking for more of the same with Stars of Carrum.

A 3YO colt from the first crop of Sun Stud’s Fiorente, Stars of Carrum takes his spot in this week’s $2 million classic courtesy of a last gasp victory in Saturday’s Group Two Drummond Golf Vase over 2040m at Moonee Valley.

Stars of Carrum was a rank outsider at the Valley – eventually starting at $51 – but it’s been a steady rise this time in with the colt coming into the race fresh from a lip second in the Listed Hill Smith Stakes at Morphettville on 13 October.

“I was actually planning on starting Stars of Carrum in the Listed UCI Stakes over 1800m at Flemington on 6 October, which is more or less supposed to be a Derby trial, but he got balloted out in favour of a lot of horses who were mainly sprinting types. Go figure?,” Laing points out. “Anyway, I was very pleased with his effort in the Vase and he should be primed to give the Derby his best shot.”

Laing certainly has no concerns about Stars of Carrum running out the distance.

“As for Stars of Carrum, he’s out of an Anabaa mare called Signoret that won seven races up to 1900m, his granddam is a stakes winner by Melbourne Cup winner, Jeune, and the third dam is by yet another Melbourne Cup winner in At Talaq. I don’t think staying is going to be his problem.

“The thing that attracts me to Fiorente is not so much his ability to win races like the Melbourne Cup and Australian Cup, but he also had a very good turn of foot over a mile, winning the (Group Two) Feehan Stakes.

“A lot of breeders are crying out for stallions that won over a distance, but will then send speed mares and I reckon the foals come out shrugging their shoulders and asking ‘what am I supposed to be … a sprinter or a stayer?’. We don’t have that problem with Stars of Carrum.”

With 30 in work at his Cranbourne stables, Laing – a former apprentice jockey and son of successful trainer, Eddie Laing – has been preparing horses since his early 20s: his first stakes winner (and one of his first runners) was 1983 Group One Thousand Guineas winner, Perfect Bliss.

Since then, Laing has produced a steady stream of black typers including Roman Arch (Australian Cup), Pantani (SAJC Derby and Adelaide Cup), Sir Pentire (VRC St Leger), multiple Group winning sprinters and now sires, Lord of the Sky and Danerich, plus a host of jumpers who have recorded victories in all of Victoria’s major hurdle/steeple events.

The current stable star is multiple Group One placed (and $1.35 million winner) Fastnet Rock mare, Missrock, who will run in Saturday’s Group Two TAB Multiplier Stakes over 1200m at Flemington.

While Laing had to pay $500,000 to secure Missrock from the 2015 Gold Coast Magic Millions Yearling Sale, the ante for Stars of Carrum was just $75,000 from the Sun Stud draft at last year’s 2017 Inglis Melbourne Premier Yearling Sale.

The attraction? “The price! I didn’t have an order and Stars of Carrum ended up being the only one I bought in Melbourne,” Laing reveals. “Shortly after, an old mate of mine asked me if I had a Fiorente that he could buy into.

“It turns out that a whole bunch of mates from my days of playing footy at Carrum – we won 35 straight games at one stage – have gotten into the horse including blokes like Ron Stubbs who played for Hawthorn.

“Hence the name, Stars of Carrum.”

While Stars of Carrum is Laing’s only Fiorente – “I had another one I bred myself who won his trial by 10 lengths before being sold for big money to Hong Kong” – he has also supported Polanski with a number of mares.

“I’ve got about eight Polanskis but they are only just starting to come into their own now that they’ve turned three,” Laing adds. “They are out of stout mares so it’s not surprising they are taking their time.

“Who knows, Polanski might end up with a Derby winner of his own one day.”

Perhaps for Laing however, he might only have to wait until Saturday for his next Derby.