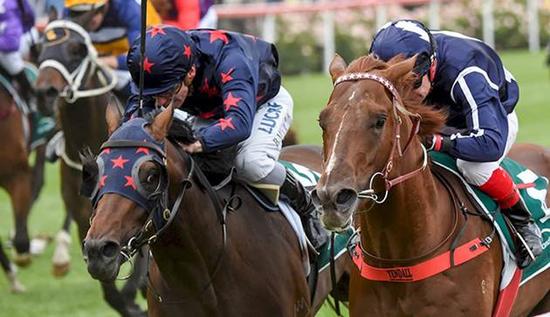 The son of Fiorente settled four back on the fence but was given an inspired steer from Ben Melham, who produced him into clear running around the bend.

Stars Of Carrum let down with a sharp turn of speed inside the final 300m to edge out Savoie in a photo finish, with two lengths back to Godolphin three-year-old Aramayo in third.

While the win came as a shock to most punters, Laing said he wasn't surprised to see the colt in the winner's stall and is predicting further improvement when he rises to 2500m next start, where he'll attempt to emulate Polanski's 2013 Derby triumph.

"It's no surprise for me, he probably should have won the Hill Smith Stakes (in Adelaide) and with clear running in the Stutt Stakes (at Moonee Valley) he probably runs second to Leonardo Da Hinchi," Laing said.

"He worked the place down this week.

"I would have loved to have given him the same prep as Polanski going two weeks between runs but the problem was when there was a race at Flemington a few weeks ago, all the sprinters got into it as they had more prizemoney and a genuine stayer like him got balloted out and had to go to Adelaide.

"It wasn't fantastic for him, he lost a bit of weight (on the trip) but he's a tough horse, you can serve it up to him because he's a good eater."