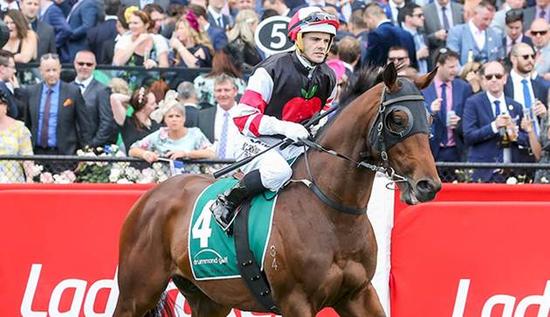 Day One of the ATC Championships at Randwick commence tomorrow with Robbie Laing Racing being at the fore with Pissaro lining up in the Group One ATC Derby over 2400m for three year olds while Double Bluff will contest the Group Two Chariman's Quality over 2600m, the traditional lead up to the Group One Sydney Cup.

Unfortunately Missrock was scratched from the Group One T J Smith Stakes this morning due to a high white cell count.

After trainer Robbie Laing consulted with senior part owner Ray Montague, it was felt best to scratch the top quality mare as you need to be 100% going into Group One races and they certainly did not want to risk her.

She will now concentrate on the two big Group One races in South Australia being the Sangster Stakes and Goodwood Handicap over 1200m, both worth 1 Million.

Missrock was so brave in both races last year running fourth and second respectively and commiserations to all of her connections for tomorrow but we know she will bounce right back in the city of churches.

Back to Sydney and Pissaro lines up for his second derby this season after the son of Pierro ran a gallant fourth in the VRC Derby last November and will again relish the 2400m of the derby distance tomorrow.

Pissaro two starts ago ran a nice fifth in the Group Two Alister Clark Stakes at Moonee Valley and was only beaten just on seven lengths in the Tulloch Stakes at Rosehill last Saturday, being his first try the Sydney way of going.

Rob would have liked a bit of rain on the track for the colt tomorrow and if it is not his day in the derby watch out for Pissaro in the VRC St Leger over 2800m on Anzac Day.

Double Bluff looks a great each way chance in the Chairmans Quality tomorrow after his game fourth in the Adelaide Cup just over three weeks ago.

Double Bluff has been in great form this preparation and under the guidance of champion jockey Damien Oliver the horse will certainly let his competitors know he is there.

The 2600m looks a perfect trip for him and as long as he can get in from the outside gate of barrier 14 he will be right in the finish.

In other stable news it was great to see Evil Cry break his maiden status at Mornington last Sunday coming from a near impossible position on the corner to claim victory, running away on the line.

It was Letser Grace's first winner for the Laing stable so well done to Lester and Evil Cry looks in for a very promising preparation and is off to Caulfield on Saturday week.

To all connections of both Pissaro and Double Bluff we wish you all the very best for tomorrow and may Lady Luck be on our side.