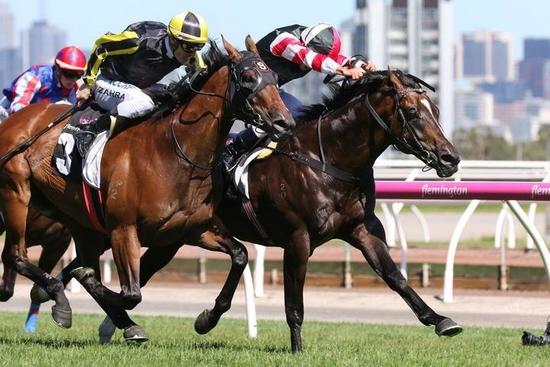 Lord Of The Sky once again resurrected his racing career when he gave his trainer Robbie Laing a birthday to remember when a narrow winner of the group 3 Standish Handicap at Flemington.

Laing, who bred the horse, said Lord Of The Sky’s comeback was the ideal 59th birthday present as even he – the staunchest supporter of the talented but sometimes frustrating horse – feared he would never return to racing after his latest injury during the winter.

‘’He’s done tendons and it (leg) blew right up after the Bletchingly over the winter and I thought that it was probably the end for him,’’ Laing explained.

‘’But he’s done a lot of work on the water walker and he looked pretty sound to me two months ago and so I just said ‘let’s give him another go’,’’ Laing explained.

But even Laing could not muster the usual confidence he has in the horse when he arrived at Flemington on Monday.

‘’I was hoping he wouldn’t run last,’’ Laing said.

‘’I didn’t know what he was going to do. His trial two weeks ago was the Lord Of The Sky of old. He ran blistering sectionals and won by eight under a tight hold but blew the house down when he pulled up.

‘’I was going to miss this race but when I had a look at the entries, I thought ‘this is not a vintage Standish’ and so in he went.’’

As usual, Lord Of The Sky was one of the first away in the straight race and sat on the speed with jockey Damien Oliver picking up the tempo when the field came to the course proper.

Oliver said he felt the horse switch legs when they came to the course proper and that gave him a kick. Still, running him down was the favourite Flippant and even Oliver was doubtful whether the horse could hold on.

‘’He just kept kicking and finding enough to hold that horse off and look, it was a tough, great effort from a good horse.’’

Starting at $16, Lord Of The Sky held off Flippant ($5) by a nose with a length and three quarters back to Chamois Road ($6) in third place.

Laing said that while a first-up win for the horse that has twice been placed at group 1 was a great thrill, he said he would be even more satisfied if the horse’s future was guaranteed.

‘’He’s a seven year-old bull and I’d hate to be saddling him up when he’s eight so hopefully through June or July some stud, if they are using their trams and trains, might pick him up,’’ he said.

‘’It’s a bit of mystery to me why a stud doesn’t pick him up. He’s got championship ability – he’s got close to winning two group 1s. There are no quicker than him.’’

Lord Of The Sky looked certain to be picked up by a stud looking for a speed stallion until a few seasons ago when the horse, who has had a history of wind problems, bowed a tendon.

‘’Then he had two runs in the spring and showed blistering speed in the Bletchingly but after the race he blew up and I thought ‘that might just be the end of him’.’’

Laing paid tribute to a former jumps jockey for helping in the recovery of Lord Of The Sky.

‘’We’ve got to give a wrap to Christine Reeve who has been riding him up through the sand dunes and through the hills at Cranbourne,’’ Laing said.

Story by Andrew Eddy via Racing.com