Laing Racing 'At The For' For The Four Days! 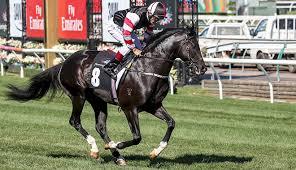 It's four years to the day tomorrow that Laing Racing captured the Group One AAMI Victoria Derby with Polanski and they are right on target to repeat history tomorrow with the up and coming stayer in Pissaro.

Pissaro will contest the blue ribband event over 2500m (Race 7) with Noel Callow in the saddle drawing gate number 10.

The son of Pierro was a winner three states ago at Morphettville over 1600m then a luckless sixth in the Listed Hill Smith Stakes at the same track followed by a gutsy fourth in the Group Two Vase at Moonee Valley last Saturday over 2040m.

Rob has always had a high opinion of the horse and feels he is an out and out stayer and will relish the 2500m trip.

If there is going to be a horse hitting the line hard in the Derby, it will be Pissaro!

The ever consistent So Si Bon lines up in the Group One Kennedy Mile over 1600m (Race 8) with Craig Newitt to ride drawing gate number 12.

The son of So You Think was brave in defeat at his last start finishing third in the Group One Sir Rupert Clarke over 1400m at Caulfield and looks a top each way chance over the mile tomorrow, only needing an ounce of luck to score a thoroughly deserved win.

Over to the last event on the programme the Group Two TAB Stakes, top class mare Missrock lines up in the feature event with Cox Plate winning jockey Hugh Bowman taking the ride drawing barrier 15.

Missrock was luckless at her last start at Caulfield where the track was terribly leader bias and her sectionals were fantastic.

Back to 1200m tomorrow and drawing the outside gate where she can come straight down the outside fence gives the mare every chance to bounce back to the winners stall.

She of course is already a Listed winner this preparation taking the Carlyon Stakes at Moonee Valley back in August.

Acoross to Tuesday (Cup Day) Laing Racing have accepted with three runners, Darabad and Cuban Fighter in the 2800m handicap (Race 4) and Reata in the Listed 1200m Sprint (Race 9).

We wish Rob and Rachael Laing, staff and all of the connections with runners over cup week the very best of luck and let's cheer all of Laing Racing's runners home with pride!