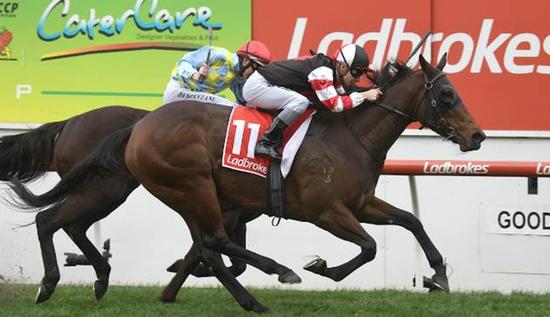 It was a poignant victory for the Robbie Laing-trained Missrock in the Listed SAJ Fruit Supply Carlyon Stakes (1000m) on Saturday.

Missrock loomed as the only threat to hot favourite Heatherly in The Valley straight, and so it proved as she over-ran her to post a 0.3-length win.

The pre-race drama saw the Mathew Ellerton and Simon Zahra-trained mare backed out of the gates and vetted after being fractious, and even though she only jumped fair, she found the rail easily enough for Damian Lane.

But Laing's charge, ridden by Ben Melham, got up in a stirring win, especially considering the news overnight of the death of long-time sports commentator and Cloverdale Agistment farm owner Drew Morphett OAM.

Missrock was one of many to have passed through the Morphetts' place in autumn 2016 at Pakenham South, where Drew and wife Kaz would look after spelling horses.

"She's only been in out of the paddock for six-and-a-half weeks," Laing said.

"Down on the Peninsula, it's been so wet.

"The only grass gallop she had in recent weeks was here on Tuesday morning. She worked nice without working super.

"But going through the [Carlyon] field, the barometer was which of these could run second in a Goodwood, and there wasn't many of them.

"As long as she got a good run - I thought Heatherly would be giving her a start on the corner - but this mare's got a bit of guts about her, she's ran third in a Wakeful and fifth in an Oaks.

The current plan for Missrock is to come back to The Valley for the Group 2 McEwen Stakes, before a crack at the Group 1 Moir Stakes - both 1000m challenges again - but Laing always thinks on the run and rules nothing out, including The Everest worth $10million at Randwick in October.

"If not this spring, our sprinters are better catered for in the autumn," Laing said.

"You get three bites of the cherry - the Oakleigh Plate, Newmarket, then Sydney, then Adelaide.

"Hopefully she can win a Group 1, she's a valuable mare as she is, but if we can build on it, it'd be fantastic.

"If Vega Magic gets a run in it [Missrock could go to The Everest]... she's beaten English two starts back... if she won a nice Group 2 or 3, she might get a spot. Runs well at Randwick too!"

Meanwhile, the Tony Vasil-trained 10-year-old General Truce ran his last race in the Carlyon, ending a career that pulled in $969,551 in stakes.

General Truce won the Group 3 Maribyrnong Plate in November 2009 at $61, one of 10 career victories, four of which were at stakes level.