Spring Is In The Air! 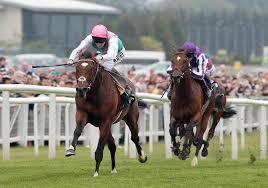 With the new racing season now off and running, Laing Racing have started with a bang with the highly impressive Reata taking out the first event at Pakenham yesterday.

The son of So You Think was only have his third race start and under the guidance of Aaron Lynch Reata gave nothing else a chance storming home to claim victory over the short course of 1200m with his final 100m being very impressive.

Reata certainly looks a horse of the future and can play a major role in the upcoming Melbourne Spring Carnival.

It's going to be a big day for Laing Racing at Flemington tomorrow with the highly anticipated first start of the royally bred son of Frankel (pictured) in Frankel My Dear.

Frankel My Dear was purchased by Laing Racing at the 2016 Inglis Easter Yearling Sale for a cool $500,000 and makes his debut in the first event at Flemington tomorrow at 11.40am over 1000m.

Frankel My Dear is a beautifully bred colt being a close relation to former champion galloper in Might And Power and has a huge racing career ahead of him.

He has been fitted up nicely in training with a recent unofficial trial victory of 800m at Cranbourne but Rob Laing did explain that the horse will only improve on whatever he does tomorrow as he is stepping out over a 1000m and will be storming home late.

"The straight course of Flemington is certainly going to suit and with only a small field on 9 runners gives the horse every opportunity to find his feet and have plenty of galloping room. Of course we will see the best of him once he gets to a staying trip", Laing further explained.

Brandon Stockdale takes the ride tomorrow pulling 3 kilo's off his back and his father Frank (Horse Trainer) is also a part owner in the horse along with Ray and Susie Montague and many loyal clients of Laing Racing.

Don't forget we also have the promising 3YO filly in Maid To Measure contesting Race 3 at 12.45pm with Dwayne Dunn in the saddle and she looks a nice each way chance while resuming.

So let's hope tomorrow at headquarters is just the start of things to come at Laing Racing and the season of 2017-2018 is one we will all remember for a very long time.

Happy Punting to all and we look forward to seeing many of you trackside tomorrow!