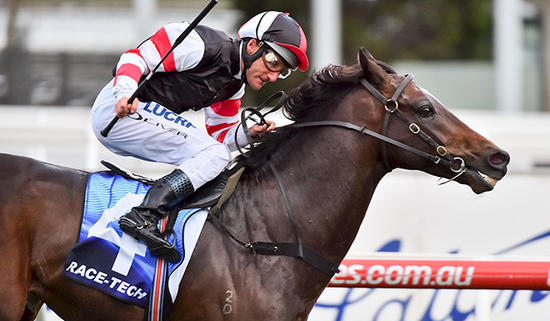 For a fourth straight year, Lord Of the Sky will run in the July sprint double of the Sir John Monash Stakes and Bletchingly Stakes at Caulfield.

A brilliant four-length trial win at Cranbourne on Monday was an even better-than-expected performance according to trainer Robbie Laing, and the Group 1 runner-up will be using two of his most-frequented events as a step-up to try and go one better at the top level.

Laing knows that is what it is going to take to draw enough interest from breeders to buy into the son of Danerich, who was marketed around for a stud deal but to no avail.

"Harry Mitchell [at Yarraman Park] showed a lot of interest in him, because he had a similar racing record as I Am Invincible - won the Monash, won the Bletchingly, and run second in a Goodwood, beaten an inch in a TJ Smith [by Chautauqua]," Laing told Racing.com on Monday.

"Group 1 performer, but just missed out on winning a Group 1.

"We had a lot of people wanting to stand him, but we were more keen to sell him on."

Lord Of the Sky won the Monash in 2014, and is the reigning Bletchingly winner. Laing's plan is to ideally try and 'run them off their legs in a 1400m Group 1 race' - which sounds like his name will have the Memsie Stakes written all over it if he performs like he did on Monday when he races first- and second-up.

In a 760m trial, Lord Of the Sky didn't allow Damien Oliver to heed to Laing's instructions.

"He went as good, if not better than I thought he might.

"I thought he might've been a bit rusty. He began OK, he quickly took up the lead as you'd expect.

"I said to Damien just look after him, give him a soft trial.

"Typical of the horse, he just knows one speed - flat out. And he sat against him, and he's won by four or five lengths, and looked like the Lord Of the Sky of old."

Laing has already tested So Si Bon in open-age conditions twice - once over 1200m, the other in the Group 2 Sandown Classic (fourth) under weight-for-age conditions - and the smart colt could be bound for even higher honours this spring.

His performance over the mile-and-a-half has Laing thinking So Si Bon might earn himself a crack at one of the carnival's richest Cups.

"When you look at his form, it suggests to me - Caulfield Cup," Laing said.

"He's unlucky in the [Victoria] Derby, fourth in the Sandown Classic, not beaten that far, and Beautiful Romance won in Dubai. Who Shot Thebarman finished next to him, and Big Orange ran third - who recently won the Ascot Gold Cup.

"He can stay. His third in the Rosehill Guineas was great.

"We're probably going to start a bit lower and win a race or two, before we get our head in the clouds."