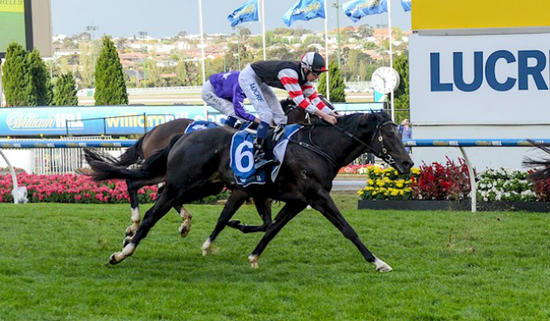 Robbie Laing's hopes of finally drawing an inside gate for a feature race with So Si Bon were dashed on Wednesday morning, the colt drawing 17 of 19 for the Group 1 Australian Guineas (1600m).

Two-time Guineas winner Damien Oliver will have the task ahead from the wide draw, but it is by no means insurmountable especially in the race's recent history - Mosheen (2012) won from 16, while last year's winner Palentino came from 15.

So Si Bon started from 11 of 14 in the Caulfield Guineas Prelude in the spring, and then 12 of 14 in the Guineas itself, had nine of 16 in the Derby and drew widest of eight in the Sandown Classic.

Laing, speaking pre-draw, said the So You Think colt is flying, bouncing out of his first-up run at Flemington on February 18 when fourth to Well Sprung.

"Probably the best I've ever had him - he's matured into a beautiful colt," Laing told RSN 927.

"That tidied him up really nice; he had a good strong gallop yesterday over half-a-mile on the grass.

"Gavin Bedggood jumped on him this morning, and said 'You might have to do a little bit with him on Thursday', so it's off its head, this horse.

Laing is hoping it his third time lucky for his multiple-stakes winning filly Missrock, who is belatedly poised to kick off her autumn campaign on Saturday.

A float incident saw her scratched from the G1 Black Caviar Lightning, then Laing spotted a 'six-inch hematoma' on Missrock's neck on the eve of the G1 Oakleigh Plate - and reported she also had a black eye - that ruled her out of a trip to Caulfield.

His mischievous filly is now set to kick off in a much lower grade, in fillies-and-mares grade over 1100m down the Flemington straight.

Other notables from Saturday's card sees VRC Derby winner Prized Icon a dual acceptor - with trainer James Cummings seeking a back-up plan in case the Randwick card is washed out.

Prized Icon will be ridden by Glyn Schofield if Cummings decides on the Randwick Guineas but if the horse heads back to the scene of his Derby win, Dean Yendall will be aboard.

Other dual acceptors across the two Guineas races are Land Of Plenty, who has drawn 15 of 19 in Melbourne and three of 14 in Sydney, and Hardham, who has come up third emergency at Flemington (barrier one) but gets a start up north if the race goes ahead, jumping from eight with Corey Brown in the saddle.

Lindsay Park's Harlow Gold and Fuhryk are joined by the Stuart Webb-trained Legless Veuve as the fillies in the Guineas field at Flemington, with Katelyn Mallyon aboard the latter from barrier six.

Mallyon rides against brother Andrew in a Group 1 for the first time - and are drawn next to each other in the big one. Andrew rides one of the Lindsay Park quartet, Snitzson, from barrier five.

It is Andrew's first Group 1 ride since the 2014 Oakleigh Plate.