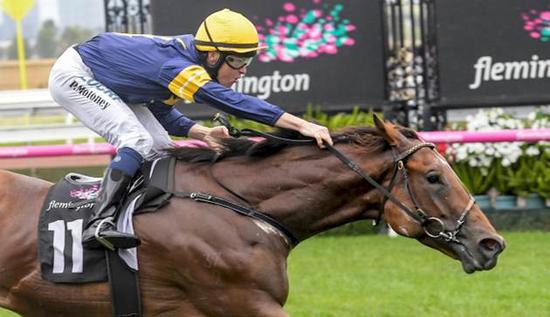 Little Indian hadn’t been the most dependable racehorse, winning just one of her first 17 starts, but she gave Robbie Laing and connections reason to believe brighter times are ahead after an excellent New Year’s Day win at Flemington.

The daughter of Not a Single Doubt had two runners behind her in the 11-horse field with 600 metres remaining but broke 33 seconds for her final three furlongs (32.99 seconds) to claim Sunday’s $80,000 Nouvelle Star BM70 Handicap (1000m) by an ever-widening one-and-three-quarter lengths.

“She’s a horse that’s got a lot of ability but does a lot wrong in her races and is starting to put it together,” winning rider Patrick Moloney said.

“They really scooted along early and she doesn’t have much early speed. She was able to get into a nice rhythm but it was a bit tricky to get her out because she wanted to keep ducking in behind Magna Rossa which we were able to stalk throughout the race.

“But once we got into the clear she just exploded," Moloney added.

Laing describes Little Indian as a ‘hot-headed’ mare that will be better in 12 months time.

“She’s got the intelligence of a two-year-old, she’s backwards mentally,” Laing said.

“When she gets to the races and learns to relax and races a bit more generously then she’d be hard to beat over 1200 metres.”