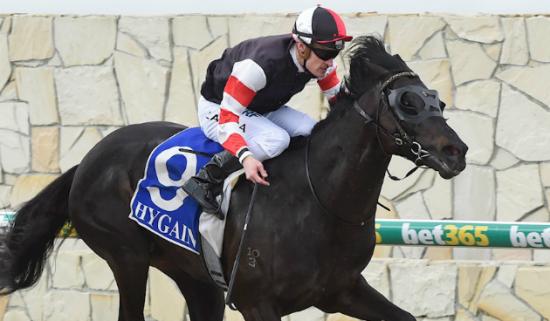 The Robbie Laing-trained three-year-old had his momentum halted at the top of the straight by the runner-up Seaburge and Laing believed it cost his horse finishing much closer to the winner.

“If he didn’t get interfered with then I think he runs in the top three,” Laing said.

“He was probably one of the only horses all day that made ground from last.”

Laing said the son of So You Think would have his next start in the Group 2 Moonee Valley Vase (2040m) in a fortnight en route to the Group 1 Victoria Derby (2500m) a week later.

“He’s relaxing so well that I think he’ll run any trip and that’s what Michael (Dee) said,” Laing said.

“Even when the pace slackened he said the horse came back underneath him perfectly and I think he’d be a lovely ride in the Derby.”

So Si Bon firmed from as much as $35 for the Derby on Saturday prior to his run in the Guineas to now occupy the second line of betting at $9 with CrownBet.

Laing said he was unable to explain the run of Missrock, who appeared to be struggling on the turn but rallied in the straight to finish seventh in the Thousand Guineas on Saturday.

“Every morning she’s been working alongside So Si Bon and maybe the colt handled it and maybe she didn’t but she just raced a bit flat, unless maybe she’s coming into season and there’s something we can’t see,” he said.

“She’ll go to the Wakeful and that will tell us a bit more about her going forward.”