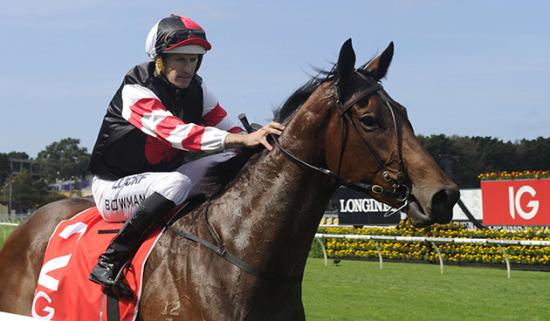 Missrock, a winner of two Stakes races in her four-start career, put her best foot forward in winning the G3 Percy Sykes Stakes (1200m) at Randwick during The Championships.

That racetrack performance was an impressive autumn cameo, coming off the back of her pelvis injury.

And Laing said he is thrilled with the daughter of Fastnet Rock's continued progression, as she prepares to embark on a Group 1 Thousand Guineas path.

"When she fractured her pelvis, she lost a lot of muscle definition in her hindquarters," Laing told Racing.com.

"Thank God it's grown back, she looks almost normal again.

"The muscle's all come back up - her work's been good, trialled terrific yesterday. She bounced well, was keen to do it and we strangled her into third place.

"Very similar trial she had prior to going to Sydney."

Missrock is entered for each of the Listed Cap d'Antibes Stakes (1100m) and the Group 2 Danehill Stakes (1200m) at Flemington this Saturday.

Laing hinted Missrock may get out to a staying trip on ability, but declared the mile her go on breeding (Fastnet Rock x Miss Judgement).

"She's not bred to get much more than a mile, but the dominant fillies over the years get 2000m on ability.

"We're making our way to the Thousand Guineas, and she's already won at Caulfield [the Listed Inglis Debutant Stakes] - which was an amazing effort to come from last with her ears pricked.

"Mile looks ideal third run in, and we'll take stock of things after the Thousand Guineas."