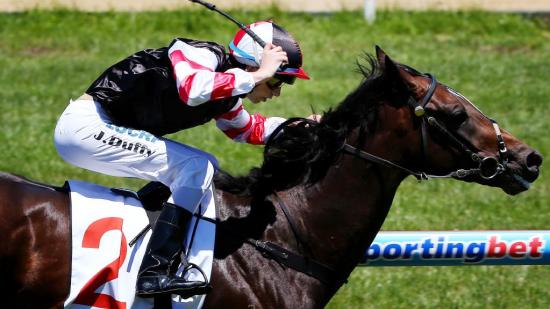 ROBBIE Laing is happy to put his head on the chopping block for maligned sprinter Lord Of The Sky, who on Saturday at Caulfield will try to break a two-year drought.

Lord Of The Sky is running in the Group 3 Sir John ­Monash Stakes, an 1100m race he won two years ago.

On that occasion he won by 4½ lengths to take his record to five wins from eight starts.

Lord Of The Sky hasn’t won in 14 starts since, but Laing pointed out that in the year after that win he still performed at the highest level.

“He ran some great races,’’ he said. “Seconds in the Christmas Stakes and the Standish, a fourth in the Newmarket and then second to Chautauqua in the TJ. Smith Stakes and a ­second to Flamberge in The Goodwood.”

The past year has been a testing time for Laing and Lord Of The Sky. It began with a seventh in last year’s Monash Stakes as the $2.35 favourite.

“He missed the start in that race and then he broke down in the Bletchingly Stakes,” Laing said.

Lord Of The Sky resumed in March and finished last in two Sydney starts.

Laing said as Lord Of The Sky was suffering concussion in his joints because of firm tracks, he decided to train him on the treadmill.

In a last-ditch effort to get Lord Of The Sky back to form, Laing freshened up the five-year-old and returned him to his previous regimen of beach work and grass work.

He gave him an “experimental trial” at Cranbourne in early May, which he won by seven lengths in the manner of “the old LOTS”, according to Laing.

“The horse is really good. He’s been magnificent in trackwork,” he said.

Laing is looking forward to the spring with what he said was an exciting group of rising three-year-olds, including So Si Bon, who will run over 1200m on Saturday.

Laing is setting Ridgway for the Caulfield Guineas and Missrock for the Thousand Guineas. “Ridgway goes super. He was immature last time in and Missrock has a stack of ­talent,” he said.

Story by Michael Manley for the Herald Sun