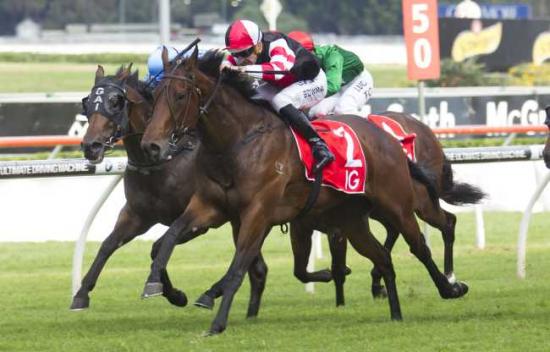 The Cranbourne trainer will opt to turn the filly out, with the Group 1 Thousand Guineas at Caulfield in October her target for the spring.

“She’s got Thousand Guineas written all over her,” Laing said post-race.

Missrock ($11), scored by a half-neck from Prompt Response ($6) with $17 chance Spright three-quarters of a length back third.

It was one of four wins on the day for jockey Hugh Bowman, and he said despite the filly’s sound effort to the line, she was not suited to the track.

“First-up this time in she wasn’t quite at home on the rain-affected ground,” Bowman said.

“I think she is a beautiful, imposing looking filly. All I can think of is Thousand Guineas in the spring time. Keep an eye on her.”

The filly almost didn’t take her place in the $500,000 race when the on-course farrier had great difficulty fastening her race-plates.

“I don’t know whether she had a twinge in her back or something but we couldn’t get her (race) plates on. She was going to be scratched an hour ago,” Laing added.

During her lengthy spell, the daughter of Fastnet Rock, who cost $500,000 as a yearling, has been on the mend from a potentially career-ending injury.

She won the Debutant Stakes at Caulfield last October, before fracturing her pelvis in her third and final start last preparation at Sandown in November.

“Her win in the Debutant (Stakes) was sensational,” Laing said.

“When she bombed the start and raced with her tail right up in the air at Sandown, it took four of us to get her up on the float to get her home - she had fractured her pelvis.

“She’s now missing a foot of muscle in her rump.”